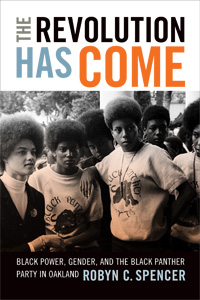 “Tearing down myths and distortions on virtually every page, The Revolution Has Come is the first substantive account of the Black Panther Party’s Oakland chapter—the iconic gathering that birthed the party and held on to its very last breath. Robyn C. Spencer’s incisive attention to gender, state repression, black radical alliances, philosophical and ideological debates, and the organization’s long decline makes this one of the most original studies of the Panthers to appear in years.” -Robin D. G. Kelley, author of Freedom Dreams: The Black Radical Imagination.

“Using a wealth of interviews and extensive archival research, Robyn C. Spencer narrates the untold history of the Black Panther Party from the inside out. A wonderful storyteller, Spencer shines a light on both the incredible promise of the Panther programs and the overwhelming, coordinated repression of the government programs designed to destroy them. Equally revealing, she shows that the Panthers’ organizational reaction to this repression contributed to their demise. Most important, Spencer threads the voices of Panther women, showing how their critical leadership, skills, and creativity sustained the organization. Beautifully written, this brilliant and groundbreaking work is important for young activists on so many levels.”- Judy Richardson, coeditor of Hands on the Freedom Plow: Personal Accounts by Women in SNCC.